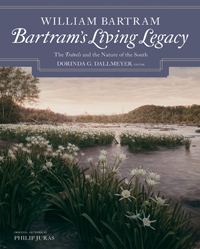 View purchase information and more from the publisher.

More than two centuries have passed since the publication of William Bartram’s Travels in 1791. That his book remains in print would be notable enough, but Bartram’s work was visionary. It fostered the development of a truly American strain of natural history. His writings transcended scientific boundaries to deeply influence Coleridge, Wordsworth, and other Romantic poets. And his text continues to ignite the imaginations of Southerners who love nature. Bartram’s ability to marry science with poetry ensured Travels a worldwide audience for the last 200 years. William Bartram was a cultural historian, too, carefully recording the way in which the Indians used the land along with the changes wrought by European settlers. Being on the road with Bartram involves cliffhanger encounters with dreadful weather, charismatic predators, and even deadlier humans. And throughout the book, Bartram reveals a deep spiritual connection to nature as a manifestation of divine Creation. Bartram’s holism lays the foundation for major themes of modern nature writing as well as environmental philosophy. In this unique anthology, for the first time Travels is joined with essays acknowledging the debt Southern nature writers owe the man called the “South’s Thoreau.” We hope this book will introduce a new generation of environmentally minded Southerners to Bartram’s timeless work, not only standing on its own but also interpreted through passionate, personal essays by some of the region’s finest nature writers. Rather than wallowing in nostalgia for the long-gone world Bartram describes, this anthology provides us with a starting point for reconstructing and reclaiming the natural heritage of the South.