About Philip Juras’s five paintings in The View from Here at the Morris Museum of Art. 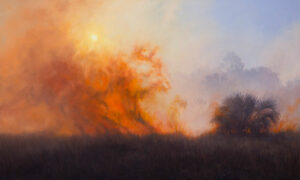 Set to reduce fuels and diversify habitat in the slash pine forest of Little St. Simons Island, this 2016 burn generated spectacular effects as winter winds pushed it into the fine fuels of the adjoining salt marsh. It went out quickly when it reached the high tide mark, an effective firebreak.

Fantastic fire scenes were plentiful that day, but the unrestricted winds in the marsh created the most exciting scenarios. I based this studio painting on video I shot late in the afternoon, capturing the dynamic spectacle of an explosive flame front, but without having to bring home all the heat and smoke. Painting from moving images allows me to approximate the expressive quality of fire paintings created in situ. 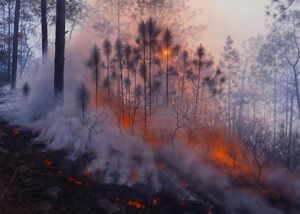 A newly-lit prescribed fire consumes a surface layer of pine needles and leaf litter as it pulls away from a narrow firebreak on a steep slope above the Flint River. It leaves an arresting scene in its wake. Beneath a clear blue March sky, smoke billowing from a deep layer of smoldering organic matter, known as “duff,” appears almost snow-like in contrast to the glowing flame front and dull ember of sunlight. As ignition continues down the hill, smoke fills the air and fire rapidly blackens an ever-widening area, further securing the narrow “handline” where the fire crew has raked away the duff to expose nonflammable rock and soil.

Conducted by the Georgia Department of Natural Resources and partner organizations on private property near the Sprewell Bluff Wildlife Management Area, this fire was designed both to control unwelcome hardwoods and to reduce the heavy layer of duff that had accumulated over decades of fire suppression. Duff must be diminished slowly over the years by repeated “cool” fires such as this one so as not to harm the established longleaf pines. For that reason, this burn followed soon after a rain. Eventually hotter prescribed fires will be welcome as conservation efforts return this montane longleaf ecosystem to a more historic duff-free condition. 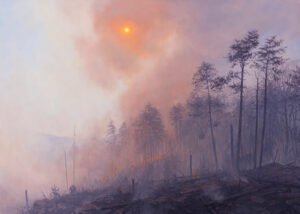 Partly imagined but based mainly on photography and field paintings, this view of Tallulah Gorge encapsulates my experience of the otherworldly aesthetics I observed there on three different prescribed fires. In this north rim scene, located directly across the gorge from the overlook on Old Highway 441, heavy smoke rises from fires recently ignited by incendiaries dropped from a helicopter. Sunlight, obscured by the rising smoke plume, gives an ominous cast to the newly blackened foreground of boulders, ash, and smoldering deadfall. Left over from previous fires, the felled trunks hint at the history and objectives of these controlled burns. Conducted every few years by the Georgia Department of Natural Resources, the National Forest Service, and partner organizations, the fires not only reduce hazardous fuel loads, they also diversify the mosaic of forest cover—creating ideal conditions for native plants and animals in this Table Mountain pine/pitch pine ecosystem. 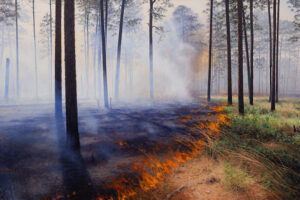 The opposite effect can be seen in Heading Fire (below), a view on the same day, but with the wind pushing the prescribed fire forward. 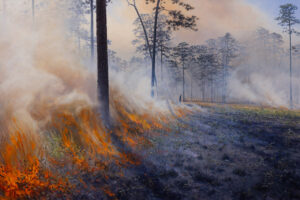 About painting the Wade Tract and the longleaf pine ecosystem:

To an artist fascinated by the ecological processes of the pre-European settlement landscape, particularly that of wildland fire, the old growth forest of the Wade Tract is paradise. It was in this region—called the Red Hills—that previously unmanaged woods-burning was purposefully harnessed in the early twentieth century by wildlife biologist Herbert Stoddard to successfully maintain populations of Bobwhite quail. For the Wade Tract, and also for the Big Woods of the nearby Greenwood Ecological Reserve, this first scientific awakening to the use of prescribed fire for ecological management has allowed the original condition of these fire-dependent forests to persist to this day. That unfortunately was not the case for most other fire-adapted environments in the United States, which at the time had no one to defend them against overzealous fire-suppression policies. Because of that, the privately owned Wade Tract and Big Woods stand as very rare examples of the continent’s original fire-adapted ecosystems.

With permission from the Wade Tract’s owners, and in cooperation with the burn team from Tall Timbers Research Station, I’ve participated in, and painted, a handful of burns at the site. Conducted during the growing season to better approximate the effects of historic lightning-caused fires, the burns readily consumed the previous year’s accumulated pine straw and ground layer flora, while killing back fire-intolerant hardwoods. Without fire, opportunistic hardwoods like water oak and sweetgum would eventually shade out the highly diverse flora of the ground layer—herbaceous plants like wiregrass and liatris that resprout readily after a fire. The longleaf pine trees are generally unaffected by the flames, protected as they are by thick bark and a suite of fire-adapted growth strategies. Longleaf seedlings that germinate in the fire-exposed mineral soil, will lay low for a few years in a fire resistant “grass stage”, developing a strong tap root that enables them to quickly shoot upward in a “rocket stage” that places their growing tip above the reach of the flames. Meanwhile, the canopy trees continually supply the forest floor with highly combustible pine needles, ensuring regular reignition. These adaptations are why they call this the “fire forest.” To be inside it during a prescribed fire, painting and photographing while the canopy above sighs and sways in a strong spring breeze, is a sublime experience; challenging to adequately convey in either words or paint.