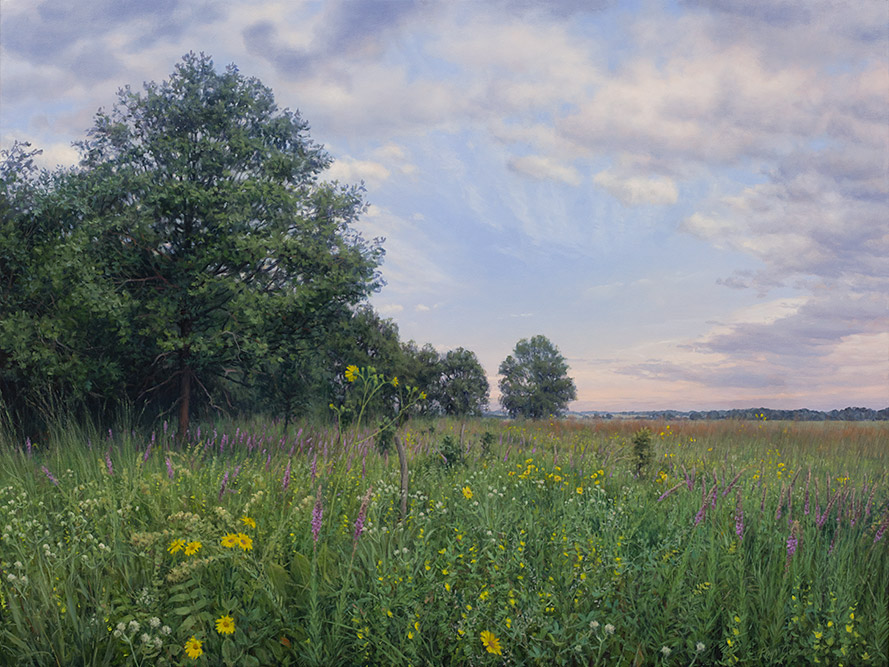 In the forest-to-prairie transition zone in southeastern Illinois, thinly treed areas called barrens were once found on gently rolling glacial topography underlain by well-drained, nutrient-poor, clayey soils. They were fire-dependent communities characterized by open-grown trees and a mixture of prairie and woodland species in the herbaceous layer. Following European settlement, barrens changed quickly to fire-suppressed, closed-canopy forests or were converted to agriculture.

Beadles Barrens is an incredibly rare remnant of a dry-mesic barren. It’s been owned by the same family since the nineteenth century and managed with fire for much of that time. It hosts 326 native plant species (as of 2005) and was dedicated as an Illinois Nature Preserve in 2000.

In this view a couple of fence posts hint at the former edge between the remnant barren and an old corn field, now restored to prairie. For compositional purposes I’ve moved a few trees and clouds around, and left out a distant farm building, but otherwise, this was the view I enjoyed on visiting the Nature Preserve late in the afternoon of August 16, 2019. From this perspective, with the barrens sloping away to the left and an open view over restored prairie in the middle ground, the historic landscape of forest to prairie transition might be imagined. In fact, the General Land Office Survey from the early 1800’s places Beadles Barrens on the north side of a 5000-acre prairie called Birk’s Prairie. It, and nearby English Prairie and Burnt Prairie, were all within a mosaic of “timber” and “prairie” outlined in the original survey.

Plants depicted in the painting include: