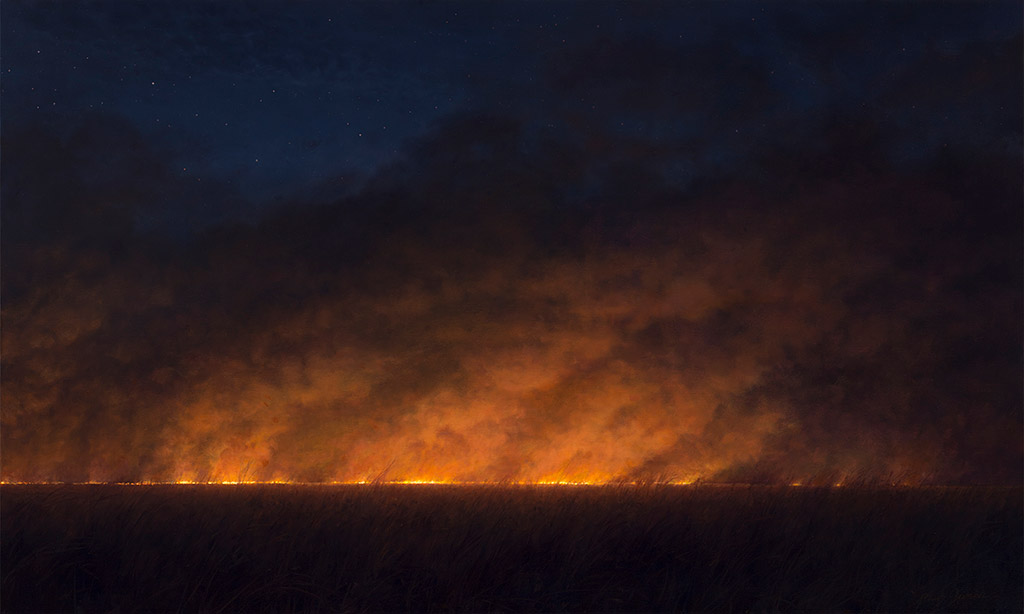 In the presettlement prairie, wildfires, particularly at night, stretching across miles of unbroken prairie were described as both terrifying and beautiful by those who witnessed them.

“A wildfire on the prairie was a magnificent spectacle, combining all the elements of terror and grandeur. It compared with a fire in the woods or in a city as Niagara compares with the waterfall of a mill-dam. In advance of it was heard a loud roar, sullen and incessant; volumes of smoke arose from its burning front, obscuring the light of the sun, clothing the whole landscape at midday for miles in the somber hues of twilight; huge masses of flame, in startling form and figure, leaped high into the air; innumerable glowing sparks, as if from a furnace, flew before it and fell on the dry grass like flakes of fiery snow.”
(David Turpie, Sketches of My Own Times, 1903)

“No sight can be more sublime, than to behold at night, a stream of fire several miles in breadth, advancing across these plains, leaving behind it a black cloud of smoke, and throwing before it a vivid glare which lights up the whole landscape with the brilliancy of noonday. A roaring and cracking sound is heard like the rushing of a hurricane. The flame, which in general rises to the height of about twenty feet, is seen sinking, and darting upward in spires, precisely as the waves dash against each other, and as the spray flies up into the air; and the whole appearance is often that of a boiling and flaming sea, violently agitated.”
(James Hall, Notes on The Western States, 1838)

In this painting, I attempt to convey some of those feelings of awe, showing a long line of fire, still more than a mile away, casting an otherworldly glow onto its smoke column while above it all, stars appear at the fading of twilight. At this distance, I imagine the roar of the flame front is barely audible, like the sound of waves when you are still far enough from the seashore, and the flames themselves are only clearly visible where the wind pushes them into the richest growth of prairie grasses. In the foreground, the distant fiery glow illuminates the tops of prairie grasses and forbs bending in the wind, making it apparent that an unbroken cover of fine fuel lies between the viewer and the fire. 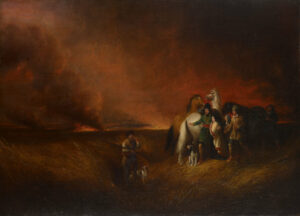 In that way it is not unlike the setting painted by Alvan Fisher, in which James Fenimore Cooper’s character Natty Bumppo must save his companions from a prairie fire (see the painting at the Art Institute of Chicago website). Such fires could still have been seen in Fisher’s day, but my inspiration had to come from historical sources and my experience with prescribed fire, particularly from several burns with the Nature Conservancy at Nachusa Grasslands in North Central Illinois.

The composition itself came to me early one morning, prompting a quick small study of it before the idea faded (see image below). Differing from the study, I decided not to include the full moon in the larger work, as this fire is driven by a southwesterly wind just after sunset, so the moon would be to the rear. The topography and theoretical location of this scene corresponds with my presettlement view of the Grand Prairie of Illinois. It offers another view of what experiencing that landscape was like. I should note that contrary to popular belief, prairie fires were not always a great danger to the traveler as the flame front could be crossed easily where the diminished fire was backing into the wind or where fuel was more sparse. They were, however, a great threat to early settlements and were soon extinguished along with the prairie they sustained. 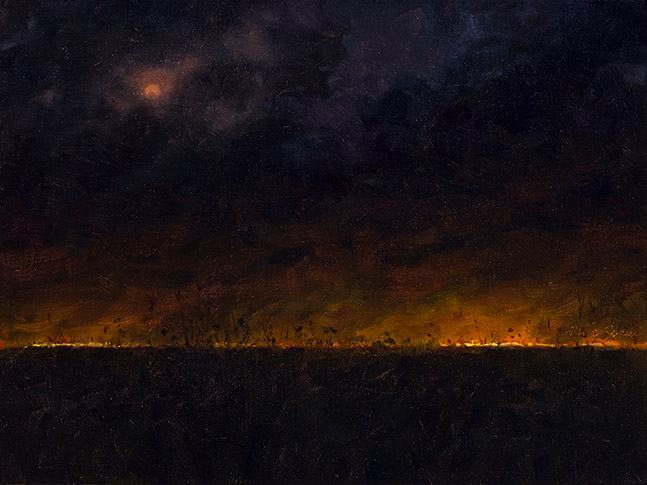 Prairie Fire at Night (Before Settlement)

Prairie Fire at Night (Before Settlement) 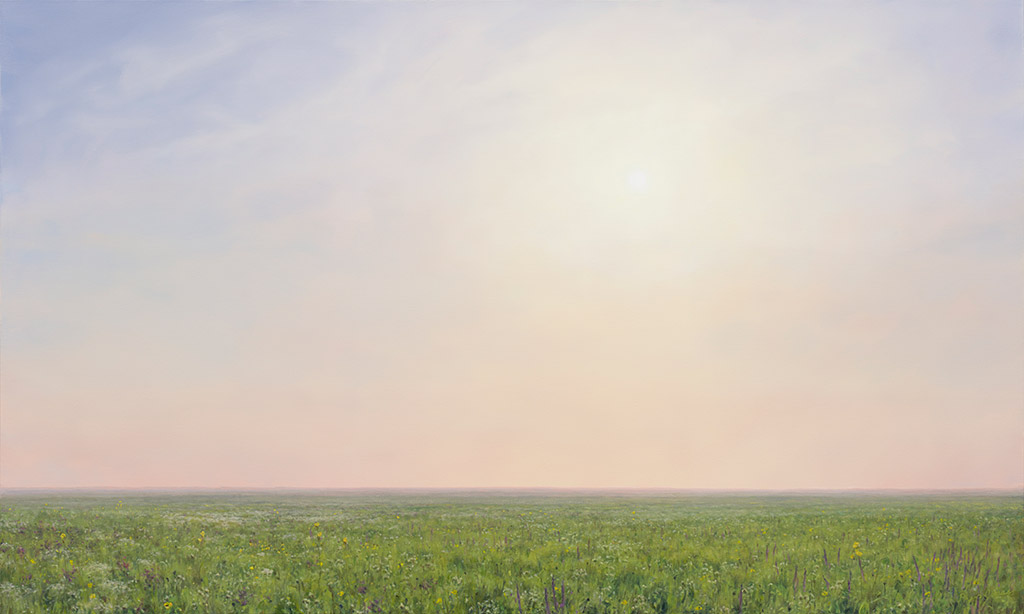