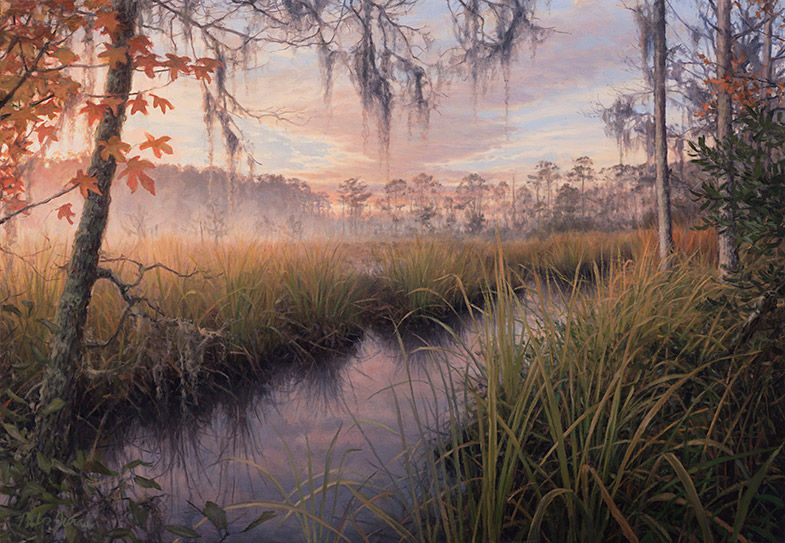 Early on December 7, 2018, only minutes after launching my canoe into a tributary of Cathead Creek, my attention was drawn to a brightly lit opening just beyond the densely vegetated bank of the channel. There, I could see the warm morning sunlight being captured and suspended in a rising ground fog, a spectacle I knew would last only a few minutes. Banking the canoe and stepping onto a low berm, I climbed hurriedly through a tangle of wax myrtles, greenbriers, and sweetgums to get my camera focused on the opening before the gilded scene dissipated.

At first glance this tranquil prospect appeared to present a lovely example of the freshwater tidal marsh ecosystem that can be found along the myriad waterways of the lower Altamaha. But this tidal zone was once found to be perfect for the cultivation of rice, and I knew, of course, that the berm I was standing on, and the linear channel in front of it, were not of a natural origin. They were built two centuries ago by African slaves, forced to carve them by hand from the malaria-ridden swamp forest of the Altamaha Delta to support a fabulous wealth in rice cultivation. This lovely, luminous marsh, filled with morning bird song and cloaked in sawgrass and cypress, was in fact an old wound inflicted by the profit-driven exploitation of humans and nature.

Clearly, looking upon this scene as simply a place of beauty is insufficient. The story recorded in its straight lines and open space is the story of the failure of an exploitive human-conceived system – obscured even as it is by the rejuvenation of centuries of natural processes. In the not too distant future, because of current human activity, those natural processes will again change Cathead Creek. Saltwater tides of a rising ocean will replace the freshwater-loving sawgrass and cypress with spartina and needle rush, and scattered cedars and groundsel will grow among the snags on the formerly tree-lined dykes. There will be a certain beauty to this scene too, worthy of an artist’s attention, but I shudder to think of the human misery that will accompany this change.

Studio painting, June. One of two on the subject (see related artwork below).