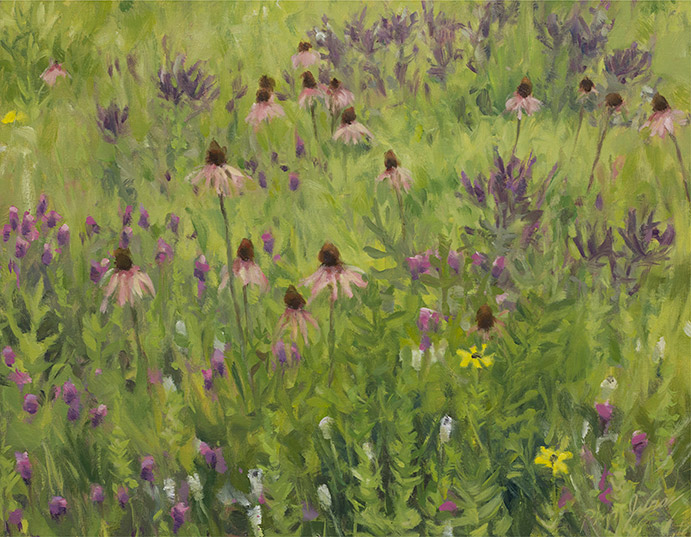 Grigsby Prairie’s range of environments, from wet prairie potholes to dry/mesic uplands, made it tough to choose the right composition to highlight the biodiversity of this restoration in Barrington. Citizens for Conservation, the volunteer organization that owns Grigsby, has restored 175 native prairie species to these 42.2 acres of former farmland over the last thirty years. With aesthetic abundance at every turn, I eventually decided on a drier upland setting for my composition. There, I was attracted to a show of purple and white prairie clovers complemented by the blooms of pale purple coneflower, lead plant, coreopsis, and black-eyed Susans. Those floral details, and the coarse-shaped leaves of forbs such as compass plant, were nicely set off by a grassy background of fine-textured prairie dropseed.

Before I began painting, however, I was distracted by the remarkably loud and constant buzz of pollinators. Every size and shape of bee imaginable was arriving and departing from the blossoms, especially those of the prairie clover that surrounded me. But upon completing my painting a few hours later, all had gone silent. Later that day I would learn that an astounding sixty-four kinds of bees collect prairie clover pollen and nectar, the pollen usually being exhausted by 10 a.m. To have just witnessed that interaction, where the prairie (and prairie clovers) had been absent for a century, seemed miraculous.

Adapted from Picturing the Prairie, A Vision of Restoration.