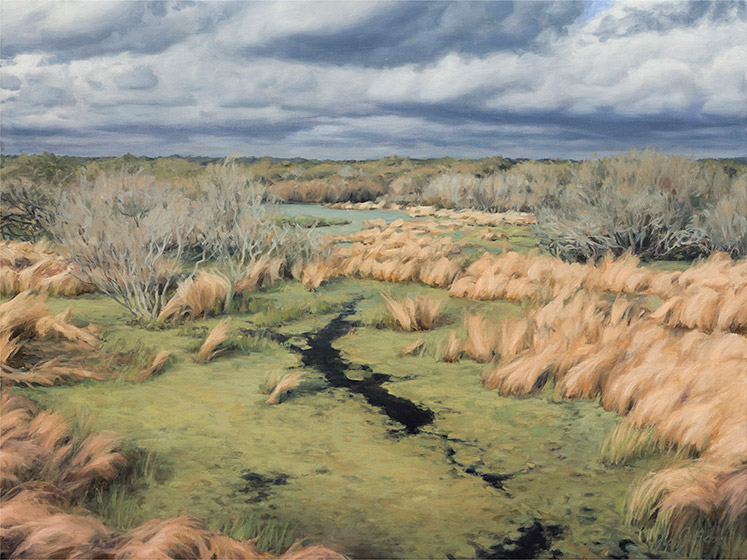 On the eastern half of Little St. Simons, brackish wetlands occupy some of the deeper depressions between the dune ridges. Formed originally as tidal pools, but now largely cut off from tidal influence, these depressions have freshened with rainwater over time. Goose Pond, one of the largest, is my favorite. A boardwalk leads to it through a surrounding thicket of wax myrtle and groundsel tree. It provides an excellent vantage point for scenes that would otherwise be quite difficult to reach. As the average depth of the brackish water increases, the tangle of shrubs gives way to aquatic species such as spike rush, widgeon grass, and duckweed.

In January of 2014, not finding inspiration in the then-featureless surface of the pond, I found myself drawn to the clumps of warm, shaggy brown spike rush growing in its adjacent wetlands. With a dark patch of open water—possibly an animal trail—as a focal point, and the sun briefly highlighting the scene against a cold, cloudy sky, I felt I had the right elements for a composition that captured this unusual place.

– adapted from The Wild Treasury of Nature: A Portrait of Little St. Simons Island (UGA Press 2016)