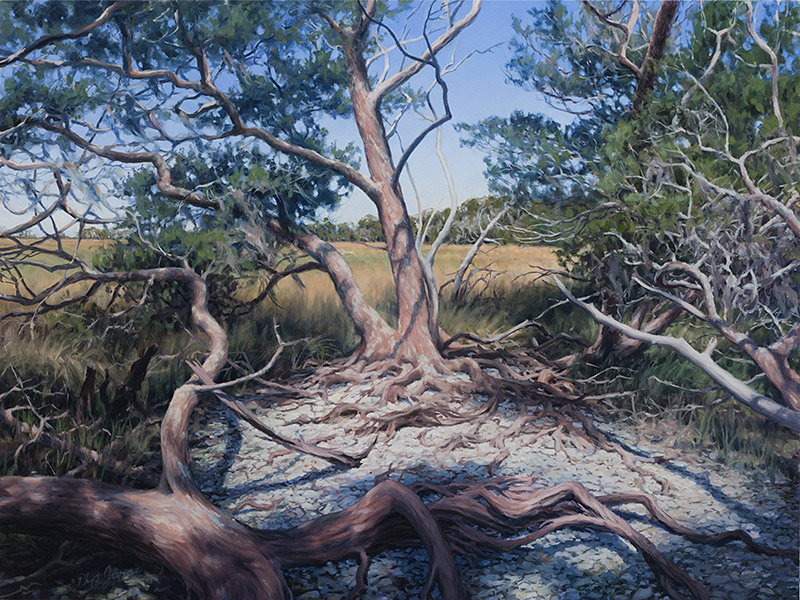 One of the most fascinating places on Little St. Simons is the shell midden woodland at the northwest corner of the maritime forest. It was this cedar-dominated area that attracted the attention of the Eagle Pencil Company and eventually led to the Berolzheimer family’s ownership and conservation of the island.

This location was also attractive to the people who inhabited coastal Georgia well before Europeans arrived. Freshwater, available nearby in the interior wetlands, and an abundance of fish and shellfish in the surrounding tidal creeks made this an ideal site for seasonal settlement. Oysters in particular were consumed in such great quantities over the centuries that an area the size of several football fields was virtually covered by varying thicknesses of discarded shells.

The soil that developed over these shell piles is much less acidic than typical island soil, a condition favored by the eastern red cedar. Where the ancient shell mounds meet the edge of the marsh, the cedars take on their most twisted, gestural forms, forms I found irresistible. Hunting for compositions among their low, unyielding branches sometimes necessitated going on hands and knees. While this gave me an intimate view of the occasional well-worn alligator trail, it also brought the random pottery shard into focus, reinforcing the thought that this was the most beautiful trash dump I would ever paint.

– excerpt from The Wild Treasury of Nature: A Portrait of Little St. Simons Island (UGA Press 2016)