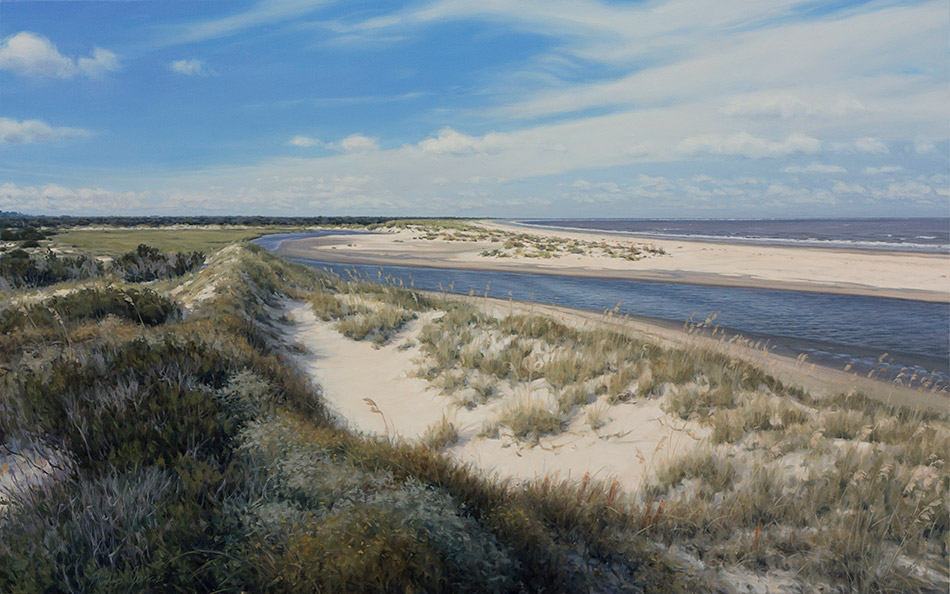 There is no better way to appreciate the emptiness and breadth of the eastern shore of Little St. Simons Island than to climb to the top of one of the high dunes on Rainbow Island and look back across Mosquito Creek. From there, all of the land that has formed in the last 150 years can be viewed in a sweeping glance. On the left the eastern limit of the pine forest (one of the historic shorelines) seems to stretch the length of the island, while near the horizon on the right, waves break over the growing sand bar connected to Main Beach. Between them lies a mile of shrub thickets, grasslands, and marshes.

There is also no better place to sense the dynamic nature of this part of the island. From hour to hour tides, wind, and weather conspire to rearrange the appearance of the scene while endless erosion and deposition reconfigure it from week to week. Such an offering of unbridled nature holding sway over miles of empty shoreline can only be fully appreciated by being there.

Nevertheless, I have attempted to convey those impressions within the limits of a rectangular picture plane. In View from Rainbow Dunes  a foreground of gulf croton, sea oats, camphorweed, and wax myrtle invites the viewer into the scene while the slanting and curvilinear forms in the dunes, creek, beach, and clouds direct the gaze to the expansive horizon. The configuration that appears in this scene was captured on a windy afternoon late in the summer of 2011. No doubt it looks quite different today.