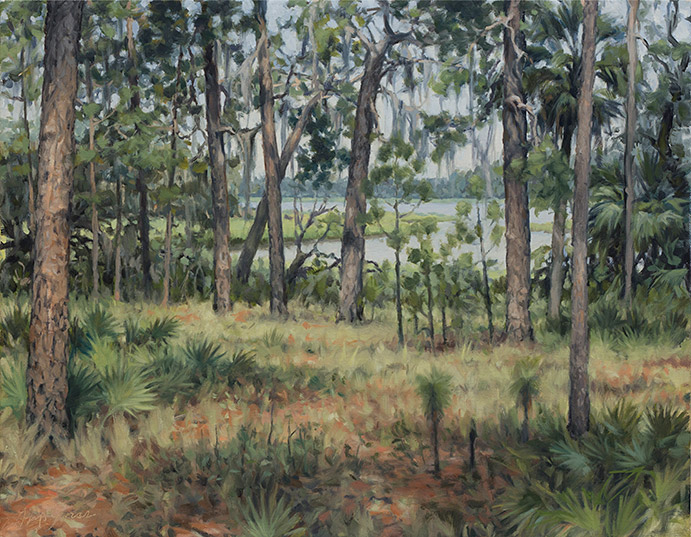 This historic or even prehistoric view of Wormsloe Plantation(https://www.georgiaencyclopedia.org/articles/history-archaeology/wormsloe-plantation) shows the type of woodlands that once dominated the high grounds of the Isle of Hope. The open understory and abundant longleaf pine that were once key features in this landscape were a testament to the frequent fires set both by Indians and lightning. In this view, the marshes around Bell’s Point can be seen beyond the live oaks and palmettos growing on the edge of the bluff. The painting was begun on location along the old entry drive into Wormsloe (there is actually an open lawn in this location today) to capture the colors and atmosphere of the marsh view. It was completed later in the studio where the historical elements were introduced. It is a view of Wormsloe as Noble Jones would have found it on his arrival in 1736.

The frame for this painting was built by Mark Poucher of Athens, Georgia, and is constructed of longleaf pine salvaged from a nineteenth century outbuilding on Wormsloe. The many extremely tight growth rings of this resinous wood suggest it was a very old tree when it was felled. It is quite likely that it was growing on the grounds of Wormsloe when Noble Jones arrived, and it is thanks to his descendant Craig Barrow that it now frames the painting in which it is figuratively pictured.

Begun on location July 21, but painted mainly in the studio – August.