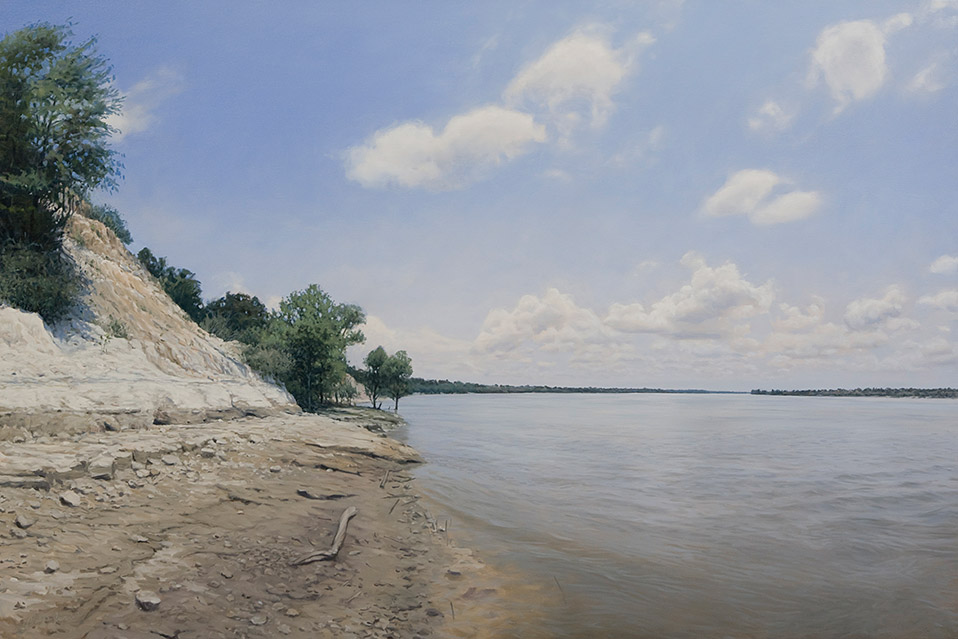 White Cliffs of the Mississippi

One of the very last stops Bartram made on the western leg of his travels was to investigate the high and very conspicuous bluffs along this lower stretch of the Mississippi River. Undoubtedly an impressive sight compared to the relatively low banks downstream, the White Cliffs, also called the Painted Bluffs, stretched for a considerable distance along the east bank of the river in 1775. Still prominent 88 years later, this same bluff formation, with its commanding view of the river, was the ill-fated setting for the Civil War Siege of Port Hudson. Both sides suffered thousands of casualties before the fortified bluffs were surrendered. On visiting the site of the battle today, it’s hard to imagine those past landscapes. Over the centuries the river has meandered a few miles southward, isolating the historic bluffs and the remnants of their port towns deep inside a reforested landscape.

However, just downstream from the historic battlefield and the massive paper mill that straddles it, the geological formation known as the Port Hickey Terrace that makes up the bluffs still expresses itself at the river’s edge. On visiting this location I was astounded to find chalky bluffs that so neatly fit Bartram’s description. Not only were there the “stratas of clay, marle and chalk, of all colours, as brown, red, yellow, white, blue and purple,” as he described, but I also found what appeared to be ancient roots or branches emerging from the purplish clay layers near the water’s edge. I couldn’t help but wonder if this was the same level of strata in which Bartram observes the stumps of ancient trees “cut off and overwhelmed by the various strata of earth, which now rise near one hundred feet above.” Upon that observation, and thinking ahead of his time, Bartram mused that an explanation for this phenomenon would be “perhaps not easily developed.” Almost in response to those musings on fluvial geomorphology, 61 years later geologist Sir Charles Lyell, a friend of Charles Darwin, was inspired by Bartram’s observations to visit the White Cliffs as he developed his own theories of geology.

More recent scientific studies from the Port Hickey Terrace formation, including the very bluff depicted in this painting, have helped delineate the Pleistocene origins of the White Cliffs and indeed the geologic and paleobotanical history of the entire lower Mississippi Delta.

Appears in: “The Attention of a Traveller”: Essays on William Bartram’s Travels and Legacy, University of Alabama Press, 2022, ed. Kathryn Braund.