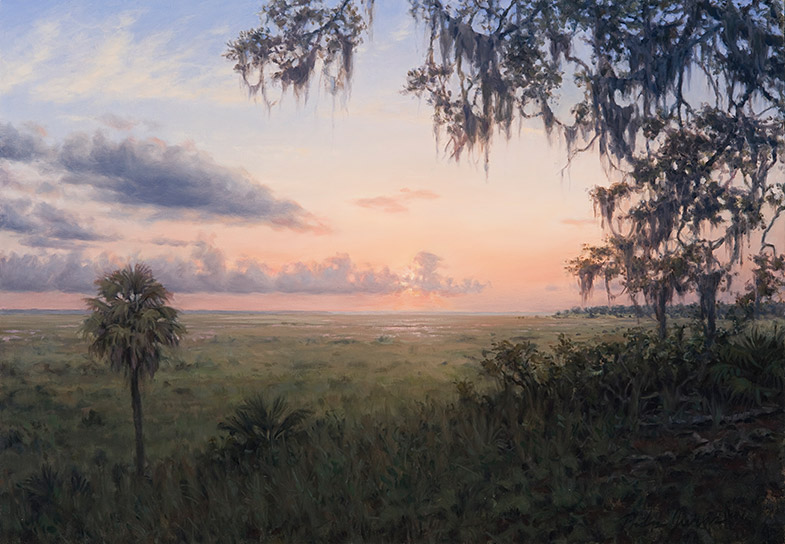 Paynes Prairie, William Bartram’s Alachua Savanna of the 1770’s, was long the domain of cattle ranchers and a playground for drainage experts. With great foresight, the State of Florida purchased most of the 10,000 acres of the basin in the 1970s, making it Florida’s first state preserve. Wherever it is possible, the Florida Division of Recreation and Parks is working to restore the prairie to a state not unlike what Bartram described.

The first time I found myself in the open space of Paynes Prairie, I was amazed to be driving across such a wide, treeless expanse. Of course, zooming south down Highway 441 from Gainesville, Florida, wasn’t exactly the best perspective to see the Alachua Savanna of the Travels, but the differences between the prairie of today and the savanna of the 1770s are helpfully obscured at that speed. That’s not to say that the prairie is completely different from Bartram’s time. It is still more or less a “level, green plain” with “scarcely a tree or bush of any kind to be seen on it.” But in this ecosystem where hydrology is the primary force in keeping the prairie open, past efforts to drain the basin and channel its waters have certainly altered the way it looks.

When I visited the prairie on foot in the vicinity of the Alachua sink, I wondered how it would be possible, even on horseback, to see all of the cows, horses, deer, turkeys, wolves, and cranes that Bartram described if they were hidden by the eight-foot-tall growth of dog fennel that seems to cover most of the prairie there today. Of course such herbaceous cover might change from decade to decade as water levels rose and fell, but I also wondered about the woody shrubs and trees that seemed to be intruding into the edges of the prairie, challenging Bartram’s description of “scarcely a tree or bush.” Perhaps the altered water flows and the long history of ranching have made such changes unavoidable. Perhaps fire also once played a greater role in the basin, working in concert with the hydrology to keep the wet prairie free of trees and bushes and even extending that openness beyond the basin. What would better explain the “gentle, grassy banks” of the hills descending into the savanna that Bartram described around the old town of Alachua? On the other hand, did the rich, broadleaf forests bordering the savanna buffer it from the fires originating in the surrounding longleaf pine and wiregrass?

With these unresolved questions in mind, it seems better to present this scene of the Alachua Savanna in the dim light of early morning. In that detail-obscuring light, perhaps Bartram’s vision best comes to mind.*