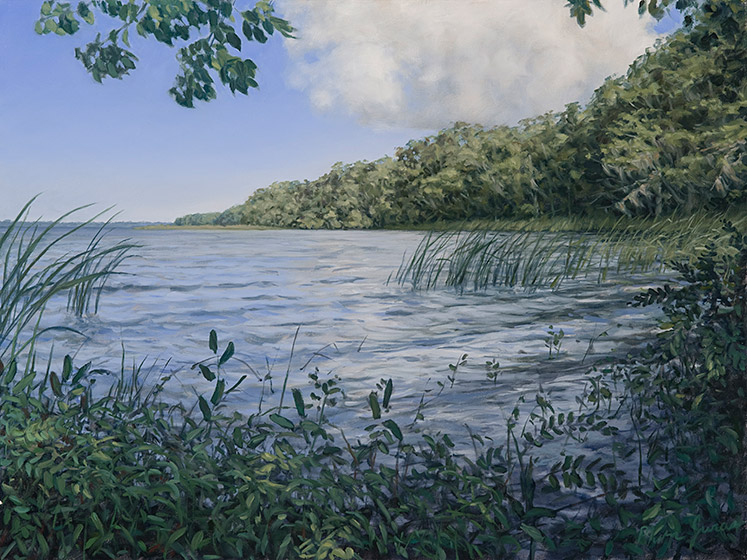 I was looking for a view on the lower St. Johns between Jacksonville and Palatka that might give an idea of what an 18th century experience on this wide, inland estuary was like. This was a challenge given the degree of development along this section of the river.

In this scene near Shands Bridge on Highway 16, the rather distant eastern shore can be seen on the left, while on the right the swamp forest and marshes of the Bayard Conservation Area reach into the river. At this point the river rises and falls a few feet with the tide, making a watery transition into the bald cypress, water hickory, water tupelo, and red maples on its shore. In addition to the swamp forest, the Bayard Conservation Area is home to a diverse assembly of plant communities hosting many rare and endangered species. One of them is Bartrams’s Ixea (Calydorea coelestina), the beautiful morning-blooming flower that William Bartram awoke to find in a savanna several miles upstream from here. History is rich here as well. The ancient Spanish route from St. Marks to St. Augustine passes through the conservation area, crossing the river to Fort Picolata on the opposite shore. It was near Fort Picolata that Bartram failed in his attempt at plantation life.

The day I captured this image, a steady east wind vigorously swept back the branches and Spanish moss of the shoreline trees. It called to mind the scene some miles north of here on the opposite bank where Bartram was kept from sailing by a wind that “blew very fresh, right in upon the shore.” *