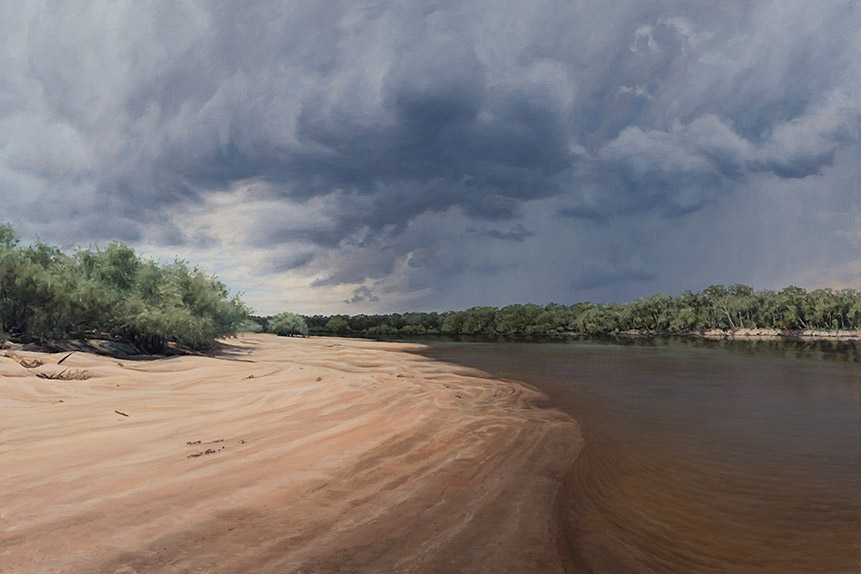 It is humbling to watch a summer storm build when your boat is parked on a wide sandbar of the greatest river in the Southeast, and you’re separated from civilization by miles of swamp forest. The changing sky, the water level marks etched in the sand, and the eroding opposite bank all point to the transient nature of this river scene. Blessedly free of dams for hundreds of miles between its tributaries in the Piedmont and its mouth at the Atlantic Ocean, the Altamaha is a wild river, free to overflow its floodplain forests and resculpt its sandy channels. During seasonal high water, the wide sandbars so popular for picnicking and camping disappear completely, with only the willows visible above the flood. It’s during these high-water events that the river takes up its endless task of carrying the millions of years’ worth of eroded soils from the Piedmont down to the Atlantic to build the beaches of the barrier islands.

On this quiet sandbar, it’s hard to imagine a time when the river served as a major commercial avenue between central Georgia and the coast. But in 1890, Congress approved “improvements” for a steamboat channel to include removing rock shoals and sand bars, building deflecting dikes, removing snags and trees, and revetting the banks. It’s just as hard to imagine as many as eighty-five log rafts a day passing this sandbar, each floating 100,000 board feet of old-growth longleaf pine to the sawmills in Darien at the turn of the century. On the other hand, as we look out across the quiet river and its 170,000 acres of magnificent floodplain forest, it is easy to envision the wilderness William Bartram experienced in the 18th century as he explored these same waters.*