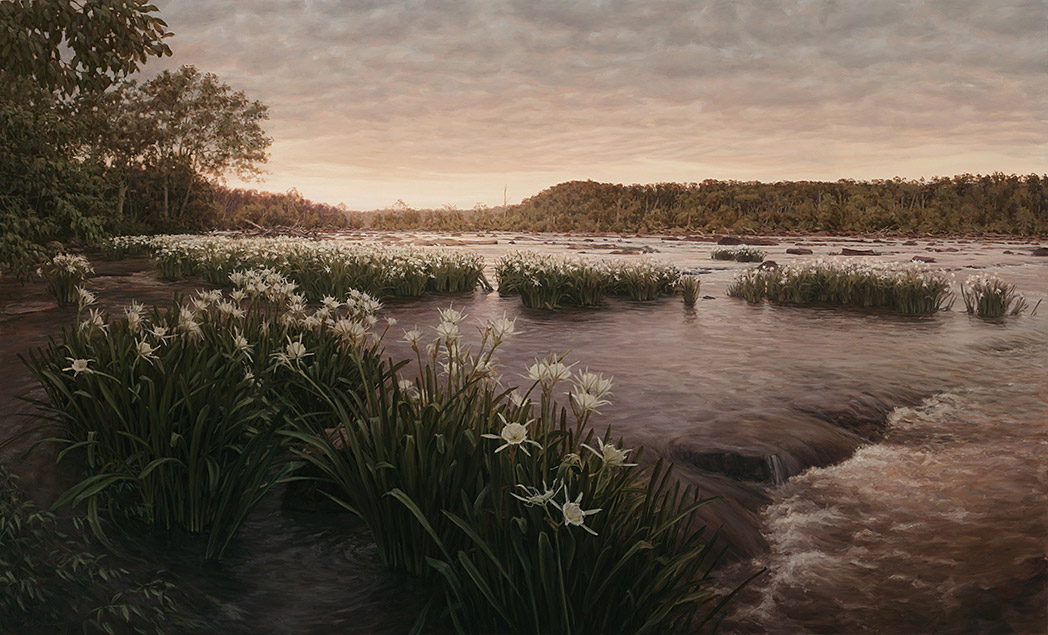 The following excerpt is from Philip’s essay in: Bartram’s Living Legacy: Travels and the Nature of the South.

There is no river scene in the Piedmont of northeast Georgia more stunning than Anthony Shoals on the Broad River. Perhaps there used to be. Perhaps the many great shoals on the Savannah River were just as glorious before they fell silent beneath the waters of the Thurmond, Russell, and Hartwell reservoirs, but I’m not quite old enough to have known any of them. Only the rapids above Augusta, my hometown, still show the beauty of the Savannah before it leaves the Piedmont. But the wildness of the river there is diminished by the new mansions looking down from the bluffs and the dams parceling out the flow from upstream. I think that’s why I love Anthony Shoals so much. This final stretch of the Broad, as it runs through the Broad River Wildlife Management Area, is the only place in the upper Savannah River watershed where the sound of a wild river still rises from such a wide swath of bedrock.

Sadly, just after the river reaches the crescendo pictured in this image, it is consumed a few hundred feet further downstream by the waters of the Thurmond reservoir. A few miles further downstream from that, under the waters of the reservoir, the riverbeds of the Broad and Savannah meet. In the 18th century William Bartram twice forded the river near that confluence and also visited the waters of the Broad further upstream on several other occasions . As I hunted for a good image of the river in May 2009, I found many of the understory trees and shrubs that delighted Bartram in the 1770s. On the evening I captured this view, mountain laurel, snowbells, mock orange, Piedmont rhododendron, and fringe tree were in various states of bloom on the steep slopes next to the river. The main show, however, was being staged on the river itself, where one of the few populations of shoals spiderlilies left in the Savannah watershed was catching the light of the western horizon with glorious full blooms. As Bartram first observed it downstream at the cataracts above Augusta, “nothing in vegetable nature was more pleasing than the odoriferous Pancratium fluitans.” It is known as Hymenocallis coronaria in today’s taxonomic nomenclature. Only a few populations of spiderlilies, including those near Augusta, have survived the damming of the watershed for hydropower.

Somehow, Anthony Shoals avoided two proposed hydropower dams, first early in the 1900s by a private company, and later in the 1940s when the Army Corps of Engineers recommended creating ten new impoundments in the upper Savannah River basin, beginning with what is now the Thurmond reservoir and including a dam at Anthony Shoals. Though spared in the 20th century, the shoals have certainly seen human activity before then. If this view had been painted 150 years ago, the Broad River Manufacturing Company would appear on the opposite bank. Its mill race would be visible reaching upstream to the head of the shoals, and in that view much of the forest would have been cleared from the hills. However, if you imagine an earlier time when Native Americans inhabited this area, it’s likely the scene would appear much as it does today.

Rocky-shoals Spiderlily, Hymenocallis coronaria, occurs only among the rocky shoals of Piedmont rivers. See: http://www.namethatplant.net/community_pdmt_rocky.shtml. They can be found blooming at Anthony Shoals, near the Elbert / Wilkes County line, in late May. 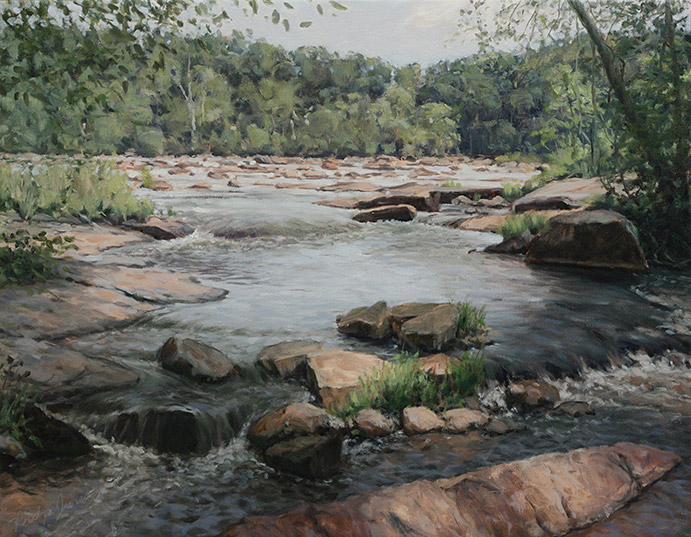 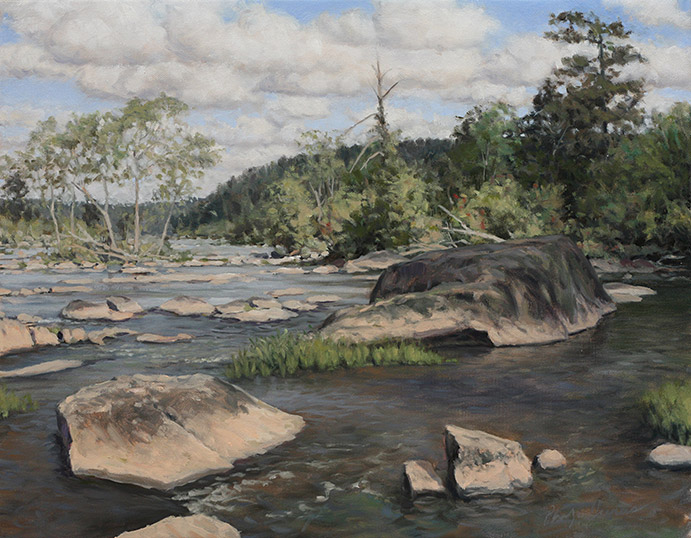 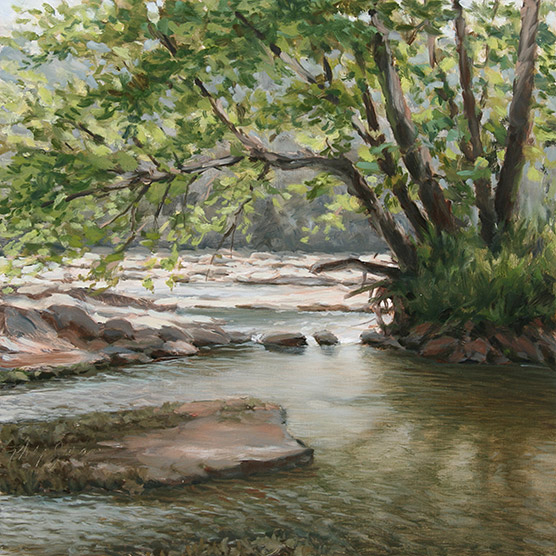 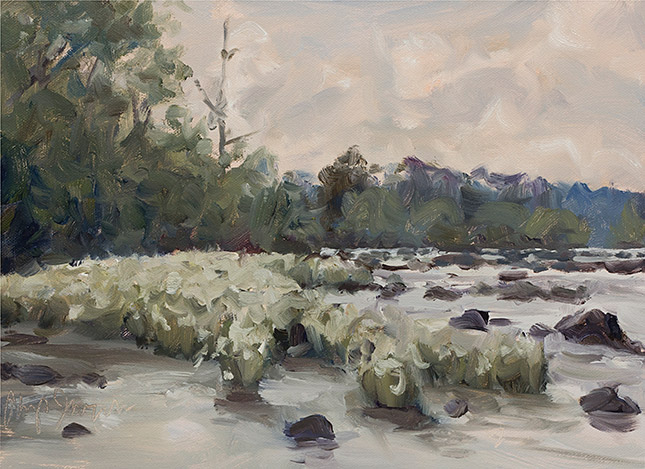 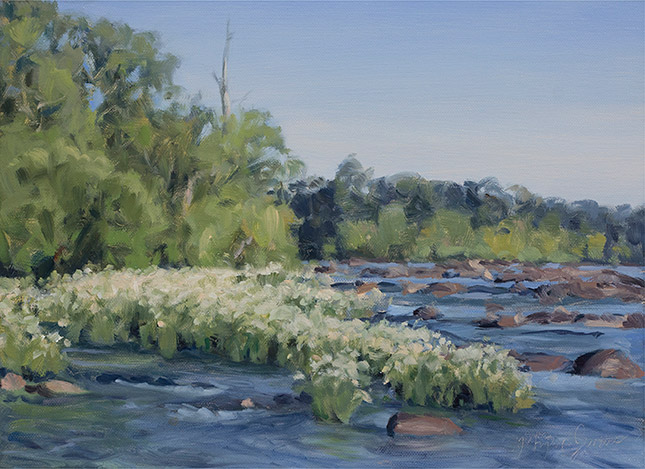