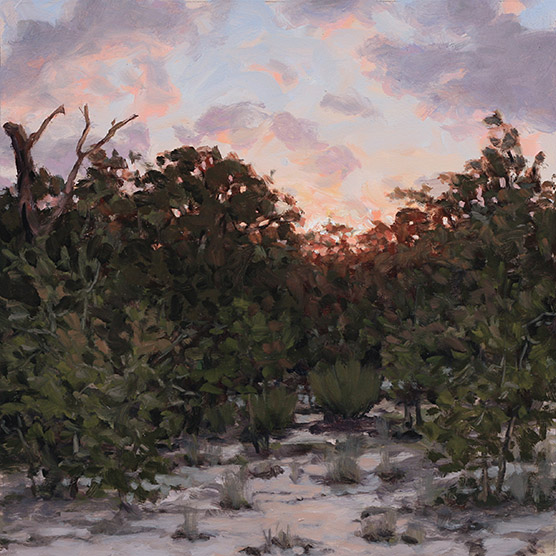 On the evening of July 20th, 2009, it was getting too dark for more photographs and almost too dark to paint. The remarkable arrangements of scrub Turkey Oak and the occasional stunted Long Leaf Pine that populate the dry, sandy dunes on the eastern side of the Ohoopee River were turning into indistinguishable silhouettes against the fiery western sky. The late daylight colors I had started painting almost an hour before had changed completely and I knew I would have to finish the picture in the studio.

Rushing in those last minutes to capture as much of the fleeting scene as I could, I was brought to a stop to by a strange noise that seemed to be coming from the dim evening sky. From somewhere overhead, every now and then, something was making what I would describe as a short, faintly mechanical, deep buzzing sound. Looking up into the deepening blue, besides a few stars, the only thing I could see were the large aerobatic birds I know as nighthawks. I see them often, flying over my hometown of Athens, Georgia on warm evenings as the students begin to populate the bars. I was fairly sure these were the same birds, but the strange sound I didn’t recognize. Where was it coming from? What was it coming from? The noise sort of reminded me of something I used to hear living in Arlington, Virginia, when large military jets high above the city would emit a strange decelerating noise, probably lowering their flaps for the approach to Andrews Air Force Base to the east. But there were no aircraft this evening, only the night birds disappearing into the darkening sky. When I described this scene with the mysterious noise the next day to James Holland of the Altamaha Riverkeeper, I found out not only that these birds also go by the wonderful name of bull bats, but also that they were in fact the origin of the noise I was hearing, a noise their feathers emit when they abruptly change direction in high speed flight.

Far from the din of urban Athens, it was the quiet sanctuary of the Ohoopee dunes preserve, a joint project of The Nature Conservancy, the Georgia DNR, and private land owners, that allowed me to hear this singularly amazing sound. It was a beautiful finish to an evening spent in search of the timeless scenes of nature. As an artist who finds inspiration in such rare natural landscapes, I am so fortunate to have the opportunity to walk and paint in this place, but the greatest good fortune belongs to the dunes themselves. Here, the sound of the bull bat, the beautiful clumps of sandhill rosemary, the gopher tortoise, and all the uncommon and endangered species harbored by this rare environment have a chance to persist while the world around them changes so dramatically.

Painted on location, finished in the studio.