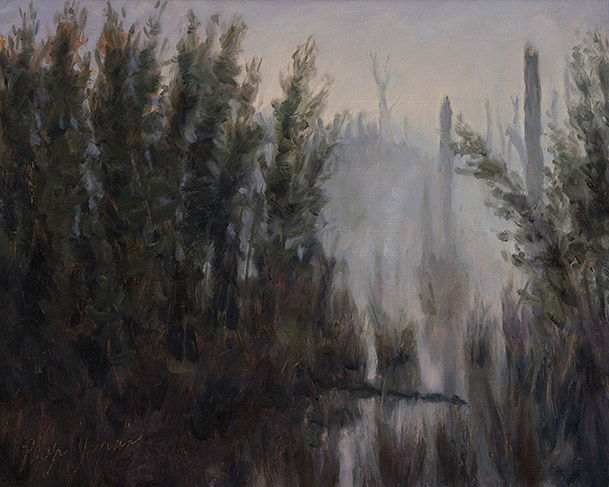 Edge of a Canebrake

Today dense stands of Arundinaria gigantea known as canebrakes are found only in small patches, though they were once widespread across the South, particularly along streams and in river floodplains. Chroniclers of the presettlement landscape, such as William Bartram, spoke of the nearly impenetrable barriers they formed, sometimes miles in extent. These massive canebrakes may have been the result of agricultural abandonment by a disease-stricken Indian population, as well as frequent fire. Extensive canebrakes began to decline as cattle overgrazed them (cane was ideal forage in the open range of the frontier), and, in an attempt to stimulate new young growth, settlers burned them too frequently. It was well known on the frontier that cane grew where the soil was richest, so those places were rapidly converted to cropland. Row cropping, particularly of cotton, dealt the deathblow to the great brakes.

In this early morning scene, I’ve imagined a landscape where beaver activity is impacting a lowland canebrake. For many centuries before Europeans arrived, beavers, cane, and Indian agriculture, played an ever-changing and interdependent role in shaping Southeastern stream valleys.