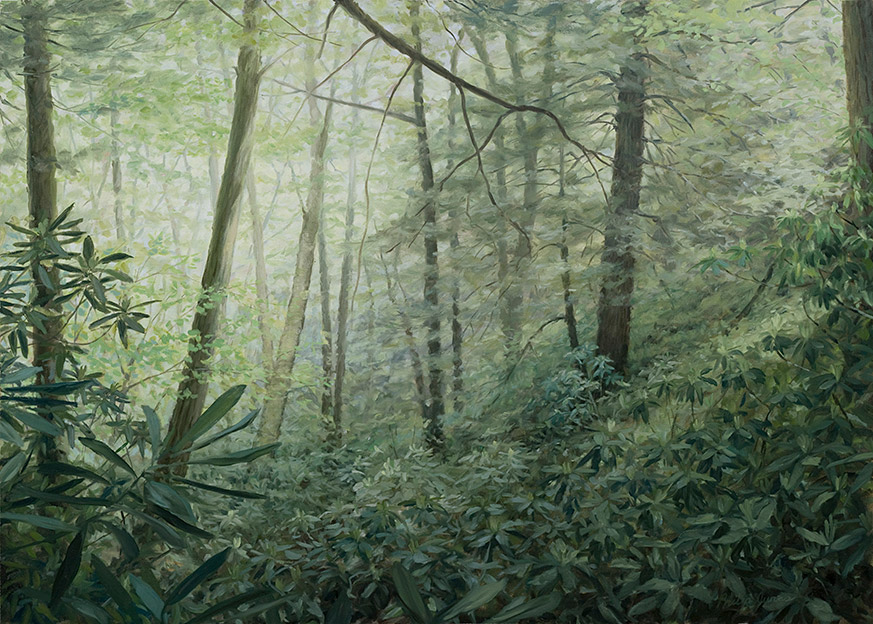 Crawling on hands and knees through an impenetrable tangle of rhododendron, occasionally bumping into huge tree trunks, feels both like being lost in a wilderness and being lost in time. That was certainly the sensation on the steep slopes above the Dark Prong near its confluence with the East Fork of the Pigeon River in the Pisgah National Forest of North Carolina. In an opening in this rhododendron thicket, I came upon this scene where a sanctuary in endless shades of green exists between the light-filled forest canopy above and the dark rhododendron “hell” below. This forest, protected by a steep, moist, north-facing slope, is a survivor of the logging and subsequent catastrophic fires experienced in this area in the early 20th century. The large hemlock in the right middle ground of this view is approximately four feet in diameter, certainly predating the arrival of loggers in these mountains, although they may have removed more economically valuable trees nearby. Unfortunately, change is coming again to this scene. The hemlocks in this forest are beginning to be attacked by an invasive, introduced pest, the hemlock woolly adelgid. Echoing the story of the American chestnut blight a hundred years ago, this Asian insect is wiping out hemlock populations from Maine to Georgia, altering the habitats associated with the cool, moist cover of hemlock forests and altering the face of the mountain landscape we’ve come to know in our lifetimes. Future generations will wonder at the standing remains of hemlocks in the way the last of the old, gray trunks of chestnuts have so often turned my thoughts to the past.

* The above excerpt is from Philip’s essay appearing in: Bartram’s Living Legacy: Travels and the Nature of the South