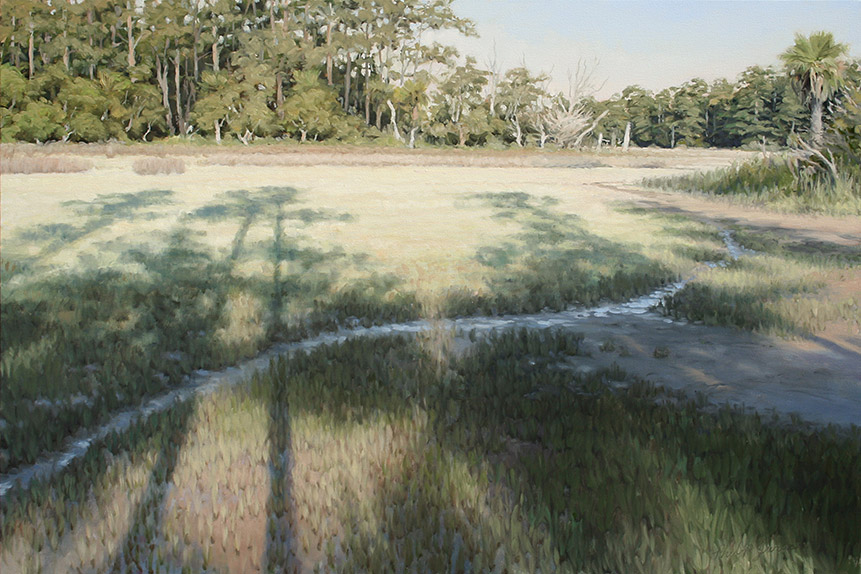 Just low enough to be regularly, but briefly, inundated by high tides, the high marsh is an interesting intersection of processes and patterns. This finger of high marsh on Bailey Island was made even more fascinating by the long shadows and warm, stark light of the early morning. Adding to the interest were the curving highways made by the local animal population. Their trails, still wet from the recent high tide, at times connect the brushy thickets of black needle rush, marsh elder, and groundsel trees, and at other times go around them. Though I couldn’t fathom their logic, I enjoyed following the meandering paths, passing by the wax myrtles, sabal palmettos, and cedars that survive in the less salty zone just above the daily tide. Occasionally, a trail would pass beneath the extended arm of a live oak, reaching out from the forest zone that sits above even the highest spring tide. The most fascinating features along the journey, however, were the open patches of sand like the one shown at the right center of the image. On these so-called salt pans, the long period of evaporation between the brief high tides leaves a soil too salty for almost any plants to survive. Only a few specialists, like glasswort, saltwort, and salt grass, can tolerate such high salinity. Around the marsh edge where rainfall has a greater effect, black needle rush takes over in the transition to maritime forest.