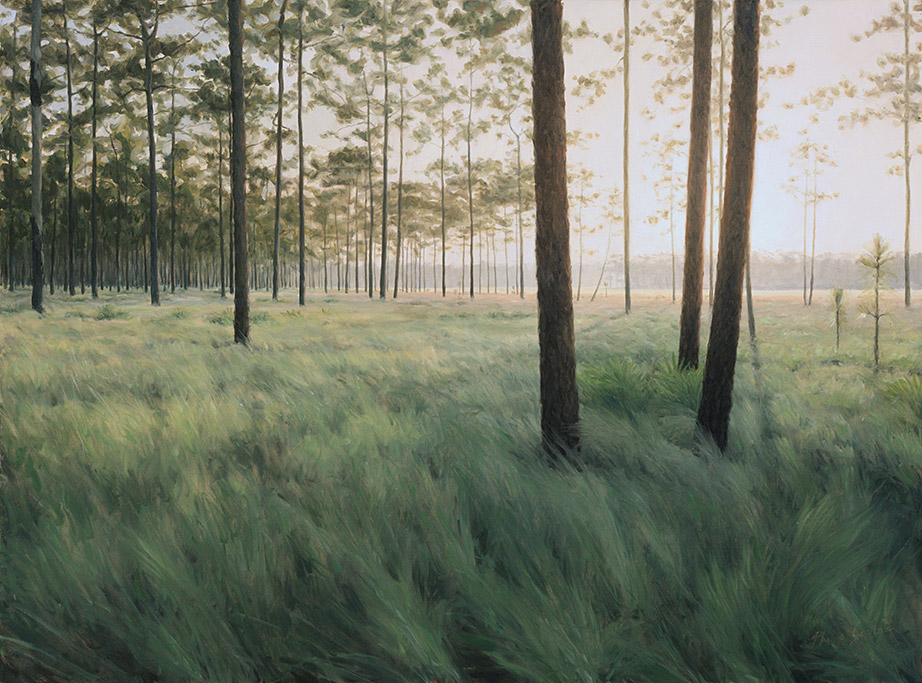 In the wet savannas of the Coastal Plain, even a very slight change in elevation can determine the viability of a species. Woody plants such as saw palmetto and longleaf pine give way to a grassy expanse where the soils are too wet for their establishment, but dry enough to allow fire to prevent cypresses and bays encroaching from even wetter soils. This delicate balance between frequent fire and flooding nurtures one of the most diverse plant communities in the Southeast. As many as forty species can be found in a one-meter square, among them insectivores such as sundew and pitcher plants, and, in a few savannas in North Carolina, the famous Venus flytrap. Once more widespread, wet savannas have been lost to drainage for agriculture, windrowing for pine plantations, and fire suppression.

The lovely location depicted in this painting is on the eastern edge of a wet savanna hundreds of acres in size in the Apalachicola National Forest in Florida. Though this savanna has only second-growth longleaf, its size and relatively intact biodiversity offer a taste of what Bartram experienced in his encounters with the “extensive” and “expansive“ savannas he so often describes on his journeys through the Coastal Plain. One such description that I feel resonates with this image comes before his encounter with the “intrepid Siminole” near the Altamaha River in Georgia.

IT may be proper to observe, that I had now passed the utmost frontier of the white settlements on that border. It was drawing on towards the close of day, the skies serene and calm, the air temperately cool, and gentle zephyrs breathing through the fragrant pines; the prospect around enchantingly varied and beautiful; endless green savannas, checquered with coppices of fragrant shrubs, filled the air with the richest perfume. The gaily attired plants which enamelled the green had begun to imbibe the pearly dew of evening; nature seemed silent, and nothing appeared to ruffle the happy moments of evening contemplation: when, on a sudden, an Indian appeared crossing the path, at a considerable distance before me…

* The above excerpt is from Philip’s essay appearing in: Bartram’s Living Legacy: Travels and the Nature of the South