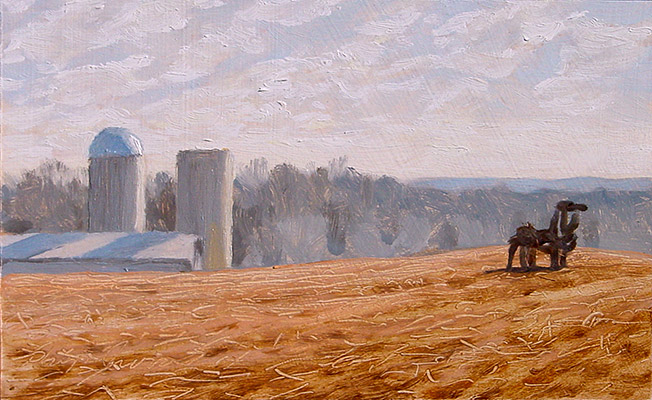 There are a few signs scattered around the east side of Athens-Clarke County today that continue the legendary tradition of the University of Georgia’s notorious Iron Horse.

Block letters on plywood pose a rather ambiguous question: ”Why?” followed by ”Iorn Horse” and then giving readers a directional arrow and mileage to the scenic spot where the horse has stood since December 1959.

Judging by these signs and the question ”Why?” posed upon them, it would seem that at least someone believes the horse must have some answers for us.

Can the Iron Horse reveal the great mysteries of the universe? And for that matter, who has put up the signs for drivers to ponder as they drift by? Who has used the charmingly Southern-style phonetic spelling of iron (”Iorn”)? And is this spelling, perhaps, a code?

While the signs might be a mystery, the tale of the horse is not.

Standing proudly in a Greene County field some 18 miles south of Athens on Georgia Highway 15, the legend of the horse precedes it.

The 2-ton iron sculpture has been making headlines since the day it reared its head in front of Reed Hall on the University of Georgia campus more than 40 years ago. The famed piece has been fought over, ridden and ridiculed, has had mentions in Time magazine, the Atlanta Journal-Constitution and Atlanta magazine, not to mention the slew of Athens writers who’ve tackled the subject. A film was even made about the notorious horse in 1982 by William VanDerKloot.

It was May 25, 1954, when Chicago sculptor Abbott Pattison unveiled his equestrian masterpiece to the world. Pattison had been invited to UGA as a visiting professor and commissioned by the art department to do five sculptures to be placed at various points on campus.

His first work, completed in the fall of the previous year, is a marble sculpture titled ”Mother and Child” which is on display behind the Fine Arts Building on Baldwin Street.

Pattison worked on the ”Mother and Child” sculpture in public — outdoors, on campus — inviting onlookers to observe the progression of his giant marble slab.

A 1953 article from the Red & Black, UGA’s student newspaper, includes a photo of a group of students standing around the artist at work.

Art was a fairly new phenomenon to the students at this Southern university, though.

While noted painter Lamar Dodd had taken over as head of the art department in 1937 and the Georgia Museum of Art had opened its doors in 1948, art for public display was not the norm in the early ’50s — certainly not the way it is today. Upon its completion, the marble statue was littered with green paint by person(s) unknown.

Welded metal sculpture also was a new addition to the art world. An entirely post-World War II development, metal sculpture was making one of its first appearances in the country on the UGA campus.

On the very evening that the sculpture of the Iron Horse was placed in front of Reed Hall, a number of disgruntled students set to work with their own creative ideas for the piece.

The horse was scribbled on with paint, hay was shoved into its mouth while manure was scattered on the ground behind it, and finally a mattress was placed under it and set on fire.

The front page of the Athens Banner-Herald displayed two photos the next day, May 26, 1954, and reported this: ”Here’s the bone of contention, the black constructed-steel horse …”

Of the artist, the report notes: ”He is, naturally, upset over the demonstration last night — which occurred scant hours after the statue was placed at the University. Members of the Art Faculty met this morning to ponder the situation and campus opinions were split between outrage at the students’ treatment of the statue and agreement with the students’ charge that it should be removed.”

The story also notes the reaction of R.I. Brittain, a university official. Brittain said it was unfortunate that students ”on the college level” had minds on the level of ”grammar school or nursery children” and ”react violently to anything new, with which they have not had previous experience.” He continued to say the students’ attack on the piece was not unlike reactions to Henry Ford when he introduced the automobile.

The other photograph with the story shows college students boasting a sculpture of their own. In the fading, yellow shot, two members of Chi Phi fraternity stand beside a wooden construct of a horse with a sign propped up against it reading ”$5,000 Modern Mule.”

A coed sassily sits astraddle the wooden piece as the students smile in relish of their mock-art accomplishment.

The artist said to The Atlanta Journal on May 28, 1954, ”I was struck with the idea of ancient Athens where people lived with sculpture all around them, and even if they didn’t like it, they left it alone. I wanted Athens, Ga., to have a piece of sculpture to look at. And I think the least I could have expected, even if they didn’t like it, was a little Southern courtesy.”

Time magazine picked up the story of the horse on June 7, 1954, and quotes Pattison as well: ”It’s degrading to have that happen to anyone’s idea. …The university took quite a courageous step in … having me come down here and work in the first place. … Now I think their action in taking the horse down and hiding it is cowardly. … I feel terrible.”

Never again to grace the campus, the Iron Horse was, as Pattison said, taken into hiding.

Then in 1958, J.A. Williams, dean of students and director of development, wrote a letter to Dodd, telling him that L.C. Curtis of the university’s horticulture department wanted to take the horse and put it on his land where people could drive by and see it.

Williams went on to tell Dodd, ”the sculpture would remain the property of the university and could be moved back to campus at any time the university requested.”

Dodd responded: ”Mr. Curtis’ interest pleased me tremendously, and I would like to see him place it on his farm. … I think everyone should understand that it should remain the property of the university.”

Throughout the years there has been talk about bringing the horse back.

In 1982 a suggestion was made to return the horse to campus as part of the celebration of the university’s bicentennial in 1985.

And in 1990 there also were discussions about taking the horse out of pasture. Curtis, though, said he’d fight to keep it on his land.

Jack Curtis, son of L.C., told the Athens Observer he disagreed with moving the horse back to campus.

”The administration of the university abdicated their response and abandoned the horse,” Curtis wrote the newspaper.

From his Watkinsville home today, Jack Curtis says part of the reason he feels the horse is in its proper place is aesthetic.

”The expanse of the curve it’s on provides people driving by a nice long look at it,” he says. ”I’ve been up there quite a bit and watched people in cars — seen their faces, you know. And few people drive by without taking a good look at it,” he adds with a hint of pride.

”It’s made an awful lot of people who wouldn’t ordinarily be exposed to sculpture exposed to it. And people have told me they’ve felt overjoyed they had a chance to see it. You know, you’ve got trucks driving by hauling logs — they’re all used to it. They’d feel kind of sad, I think, if it weren’t there anymore.”

As for the many rumors of nighttime outings by students and other curious onlookers, Curtis says he isn’t sure how many people take evening treks out to visit.

There was, however, an incident about six years ago when visitors to the horse apparently lit a fire in the field. Curtis says that could have been disastrous as the field and the nearby hay barn could’ve gone up in flames.

”People also used to go out there and tip it over all the time,” Curtis says. ”That was before we put it in concrete in the mid or late ’60s. Seemed like every Monday we’d have to go over and push it back up.”

A UGA student when Pattison was working on the piece, Curtis says he used to go over to the building where the artist was working and watch the progress on the work.

He also remembers the night several years later that saw him loading the horse onto a flatbed truck and overseeing its slow progression down Broad Street in the wee hours. ”The Varsity was across from the Arch back then, and we had to wait until almost everyone had cleared out before we started. On a dark night (in December 1959), the horse traveled right through the center of town,” he says.

Curtis also remembers that the late Bill Tate, a friend of Curtis’ who then ran the campus police (which, as Curtis remembers, consisted of about two other people), didn’t like the sculpture.

”Shortly before he died he called me and told me the students were trying to bring the horse back to campus, and he said he didn’t want it — which was funny, because they were talking about putting it in front of the Tate Center!” The Tate Student Center was named for Tate, who served the school as dean of men.

It seems there’s no truth to the rumor that the horse has its backside facing Athens because of its sour experience on campus. ”The truck got stuck, so that’s how it stayed,” Curtis says with a laugh.

It’s obvious that over the years, Curtis has become quite attached to the horse.

In his living room is a photograph of the horse taken at night, which he describes as a beautiful shot.

And, he says, ”We always judge the corn crops on whether or not we can see the horse.”

Thoughtfully, Curtis adds, ”Sunrise is as pretty a time as any to see his silhouette in the field — and some sunsets are nice if you can be up behind it on the hill. It’s a very exciting piece.”

And so the horse stands, subject of a wealth of stories brought on by the initial negative reaction to its presence on campus. A legend in its own time, the Iron Horse shares its history in Athens with its home in Greene County.

Note: in 2006, I painted a second, larger, studio painting of the Iron Horse (see link below). 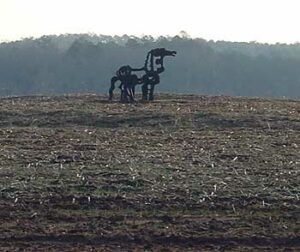 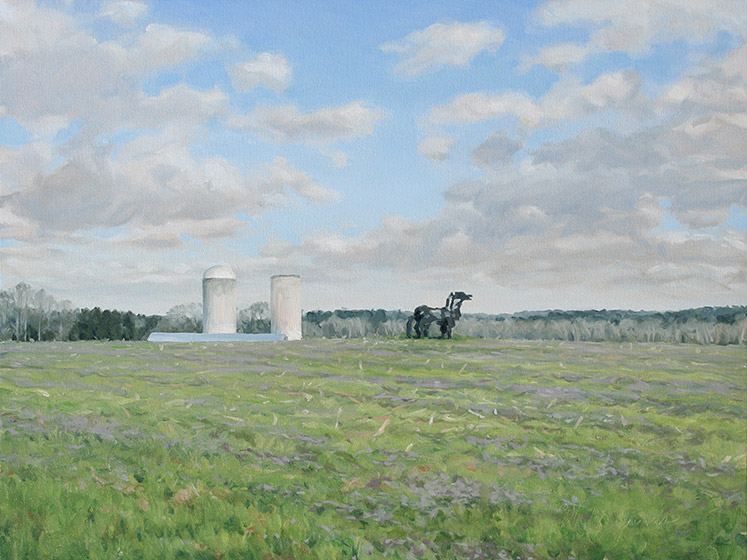