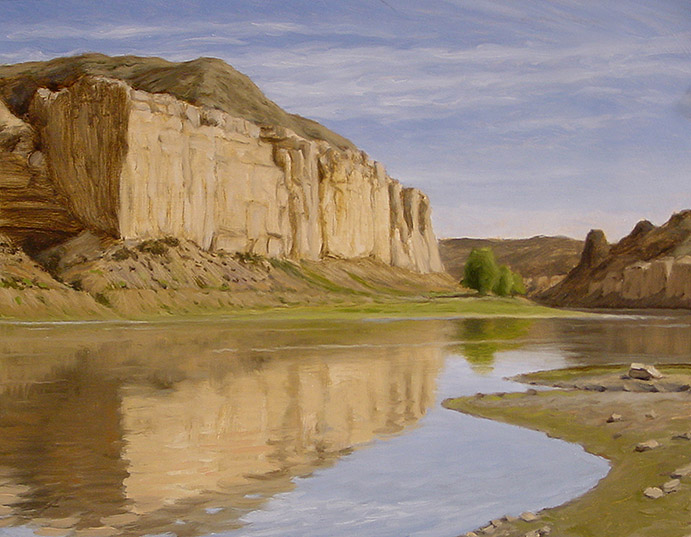 In August 1833, Swiss artist Karl Bodmer, accompanying the German Prince Maximillian of Weid on a scientific expedition up the Missouri river, sketched in watercolor many of formations of the Missouri Breaks. In the left lower part of his watercolor View of the Stone Walls (Image scanned from “Karl Bodmer’s America”, Joslyn Art Museum, 1984.) the white cliffs and other recognizable features can be seen. The perspective of my painting is from the shoreline just beyond the dark cliff on the right bank, a Lewis and Clarke campsite. It is amazing that in the 21st century the elements of this scene are virtually unchanged since Bodmer’s time – making for a phenomemnal canoe trip on this stretch of the river.

Thomas Hart Benton’s painting Lewis and Clark at Eagle Creek from the Musuem of American Indians and Western Art, Indianapolis, Indiana, shows a similar setting as he would have observed it in the mid 20th century. 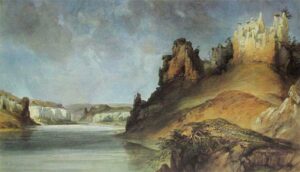 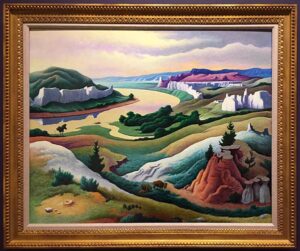