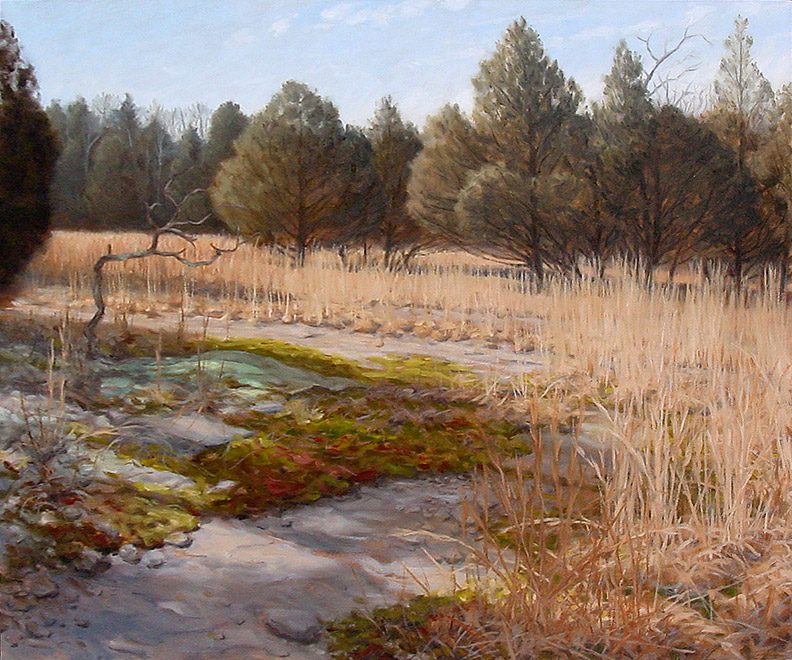 Rock and Shoals flatrock is an unusual place in the otherwise forested Piedmont around Athens. As an artist interested in the southern wilderness before European settlement, I have found its outstanding aesthetic qualities and unique natural features to be a compelling subject. This painting, begun on location and finished later in the studio, depicts Rock and Shoals as I found it one fine winter morning in 2001.

Although historical uses of the outcrop have left it somewhat degraded, it still largely retains the landscape patterns and drought tolerant plant species it has hosted for eons. Groupings of eastern red cedars suggest the location of cracks and deeper soils on the rock face while drifts of little bluestem grasses betray soil depths just deep enough to support herbaceous species in this nutrient poor environment.  Four of the most significant outcrop species in Georgia can be found here, including dwarf hatpins, open-ground draba, glade thimbleweed, and elf orpine. Two of these (the draba and orpine) are listed as protected in Georgia. The presence of th­ese specialized plants suggests that the conditions that support them have been in place for a very long time.

These same conditions create the rich aesthetic qualities that lend themselves so well to representation. While the ground underfoot is often patterned with beautiful arrangements of rock, lichens, and mosses, finely textured grasses and the characteristic cedars give structure to the inviting spaces of the overall landscape. Presented on canvas, they invite the viewer to step into the scene.

Rock and Shoals is located off of Barnett Shoals Road near Cedar Creek.  In the spring numerous wild flowers can be enjoyed from the publicly accessible nature trail. Confederate daisies bloom on the outcrop at the end of summer. Under joint ownership of the Georgia Department of Natural Resources and Athens-Clarke County, this natural treasure will be preserved for generations to come. 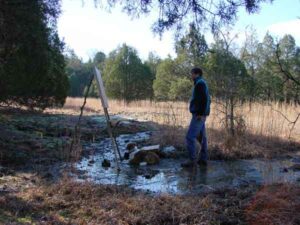